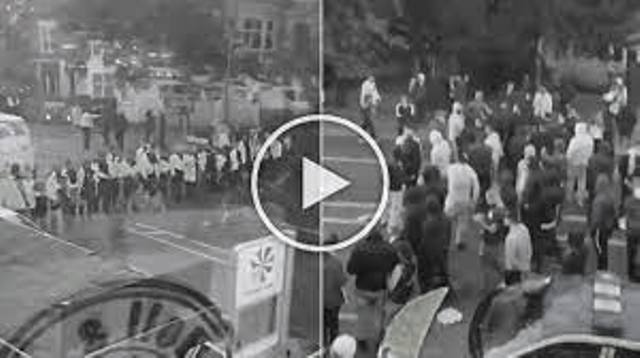 London: After India won the Asia Cup game, there have also been reports of Hindu-Muslim hostility in Britain. 27 people have been detained following violence and hostilities between the two communities in Leicester, a city in the east of the United Kingdom.

The tense situation began following the India vs. Pakistan cricket match for the Asia Cup on August 28. Pakistan suffered a loss in this Asia Cup match as India prevailed. Following that, Pakistani supporters staged a protest march, which raised the stakes.

In the video footage that surfaced of this protest march, the police are seen controlling this aggressive protest march. It is visible that despite being stopped by the police, glass bottles were thrown and some people were seen on the road carrying sticks and sticks. Video footage shows a man holding a flag outside a shrine on Melton Road in Leicester.

There have been more violent episodes and tense situations. Following the cricket match between India and Pakistan, there is now animosity between Hindus and Muslims among the supporters. It wasn’t until after this that there was unrest in Leicester once more. Since the police got involved in this case, 27 persons have been taken into custody. Leicester Police issued a social media peace appeal, but tensions are still present. Violence and unrest will not be permitted, according to the police. The guilty will face harsh punishment.