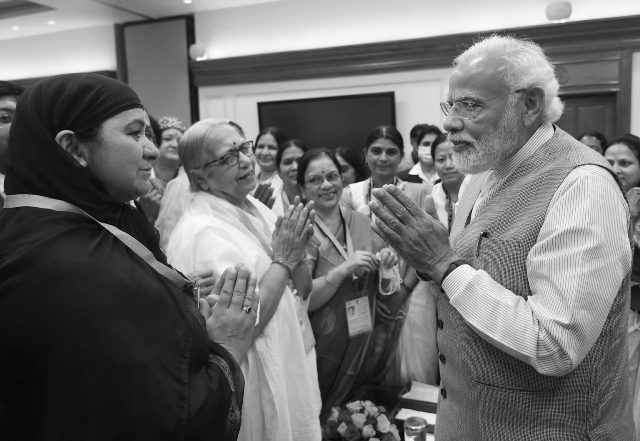 Bhopal : Describing women’s empowerment as the priority of the government, Prime Minister Narendra Modi said on Saturday that in the new India, from the Panchayat Bhavan to the Rashtrapati Bhavan, the flag of women’s power is waving.

Addressing the ‘Self Help Group Conference’ in Sheopur, Madhya Pradesh, the Prime Minister described women as his strength and inspiration. He said that usually he meets his mother on his birthday and seeks her blessings. He said that today I could not go to him, but lakhs of hard-working mothers in tribal areas and villages are blessing me here today. He said that seeing this scene, my mother will be satisfied that even though the son did not go here today, lakhs of mothers have blessed him.

The Prime Minister said that a huge difference between the India of the last century and the new India of this century has come in the form of representation of our women’s power. In today’s new India, the flag of women’s power is waving from Panchayat Bhawan to Rashtrapati Bhavan. The Prime Minister said that since 2014, the country has been engaged in enhancing the dignity of women and solving the challenges faced by women. You know very well the troubles that came due to the absence of toilets, the troubles caused by the smoke of wood in the kitchen. Your life has been made easier by building more than 11 crore toilets in the country, giving gas connections of more than 9 crore Ujjwalas and providing water from the tap to crores of families.

He said that the economic empowerment of women empowers them equally in society. Our government has opened the closed door for daughters. Daughters are now enrolling in Sainik Schools, becoming Police Commandos and joining the Army.

The Prime Minister said that the government is working continuously to create new possibilities for women entrepreneurs in the village economy. Through ‘One District, One Product’ we are trying to take local products of every district to the big markets.

Premier Properties and Projects launches its upcoming ventures on Dusshera