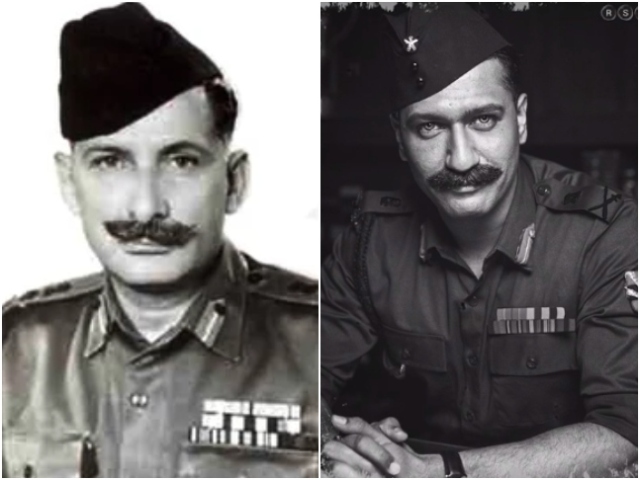 Film actor Vicky Kaushal is in the discussion about his upcoming film ‘Sam Bahadur’. The film is a biopic of India’s first Field Marshal Sam Manekshaw. Vicky Kaushal, Sanya Malhotra and Fatima Sana Shaikh will be seen in lead roles in the film. The shooting of the first schedule of this film, which has been in discussion for a long time, has been completed. Vicky Kaushal himself has given this information to the fans through social media.

Vicky Kaushal has shared a post from his official Instagram account, sharing two pictures and two videos. In the first picture, he is seen with Meghna Gulzar. At the same time, the entire crew of the film is seen in the second picture. In the third picture, Vicky is seen cutting the cake. In the fourth video, Vicky is seen applauding the entire team. In the pictures, Vicky and Meghna Gulzar are wearing khaki-coloured hoodie jackets, which read ‘Sam Bahadur’. With this post, Vicky wrote in the caption, ‘After working continuously for more than two months in five cities, the schedule of ‘Sam Bahadur’ is finally complete. Still, a few more cities and a few more months of work left. The journey of making ‘Sam Bahadur’ is still on. See you soon team.

It is noteworthy that Vicky is playing the title role i.e. Sam Bahadur in this film. While Sanya Malhotra will play the character of Silly Manekshaw, wife of Field Marshal Sam Manekshaw. On the other hand, Fatima Sana Shaikh will be seen in the role of Indira Gandhi, the first woman Prime Minister of India. Both Sanya and Fatima are very excited about this film. This is the first time that Vicky Kaushal will be seen sharing the screen with these two actresses. Directed by Meghna Gulzar, this biopic was announced in the year 2019. It is being produced by Ronnie Screwvala. The audience is eagerly waiting for this film.

Gold and silver fall for the second consecutive day

Monsoon Season :Pregnant women and their children must be cared for

International Mother Language Day : Know how many mother tongues are spoken in India?

After Twitter, now preparing to lay off Facebook’s Meta employees