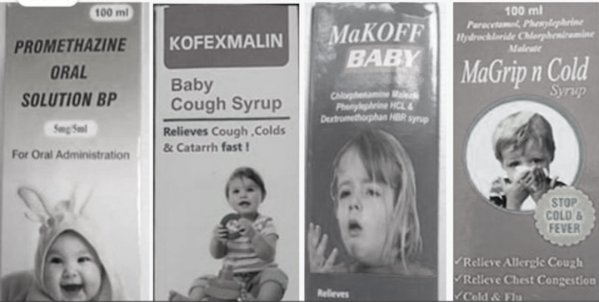 Following a warning from the World Health Organization (WHO) and a door-to-door search for the syrup after three infants died from the syrup made in India, The Gambia has requested that it be withdrawn.

It should be highlighted that more than 60 youngsters in The Gambia have passed away from kidney failure after consuming Indian syrup.

Dr Mustafa Bittay, the country’s director of health, acknowledged that the children’s deaths were caused by deadly kidney injuries, leaving 2.4 million people in the country and the entire world in sadness. Concerning these fatalities, the World Health Organization (WHO) has issued a warning.

The Central Drugs Standard Control Organization (CDSCO), the nation’s drug-regulating body, has begun a thorough inquiry into the situation, the Ministry of Health and Family Welfare declared on Thursday.

The four syrups that caused concern were Promethazine Oral Solution, Kofexmalin Baby Cough Syrup, Makoff Baby Cough Syrup, and Magrip N Cold Syrup, all of which are produced by Maiden Pharmaceuticals.
The Indian government also made it clear that the corporation only possessed licenses “for export” of these four pharmaceuticals, not for production or sale in India.

The well-known brands that it is sold under in India and how they affect a child’s physique. The brands listed below are entirely safe and have nothing to do with the claimed assertions made by the WHO, it should be underlined.

Promethazine Oral Solution
Promethazine is a commonly used drug that is sold under the trade name “Phenergan” and is made by Abbott in India.

The body releases a substance called histamine when it is exposed to an allergen, such as pollen. Among other symptoms, histamines produce watery eyes, runny or blocked noses, sneezing, skin rashes, and itching. The anti-allergic drug promethazine works by preventing histamine from doing its job.

By preventing bodily chemicals that could otherwise cause nausea and vomiting, the medication aids in the calming of the nervous system.

The medication, which is a blend of four formulations, is used to treat cough. It contains the anti-allergic drug pheniramine, which assists in easing symptoms like watery eyes, a runny nose, and sneezing. Additionally, it contains ammonium chloride, an expectorant that lessens the stickiness of mucus and other airway secretions to aid in their clearance from the airways. Additionally, it contains sodium citrate, a mucolytic that thins and loosens mucus.

In addition to Blue Cross’ TusQ DX, notable brands in this category of cough medicines include Sun Pharma’s Chericof, Glenmark’s Alex Junior, and Ascoril D.
This syrup, which combines three different formulas, is used to treat dry cough. It functions as a decongestant by constricting the tiny blood vessels, and relieving nasal congestion or stuffiness. The medication contains a cough suppressant that stops coughing by lessening activity in the brain’s cough center.

Magrip N Cold Syrup
Among the well-known manufacturers of medications in this category are Zuventus Maxtra P, Solvin Cold, and Sumo Cold.
It is an additional anti-allergic medication that also contains paracetamol to lower fever and ease body aches. The medication functions by preventing the brain’s chemical messengers that trigger fever and body aches from leaving the brain.

Premier Properties and Projects launches its upcoming ventures on Dusshera

All About Dental Lasers

World is worried about the new wave of Corona

Expecting during winter? Here are some things you can do