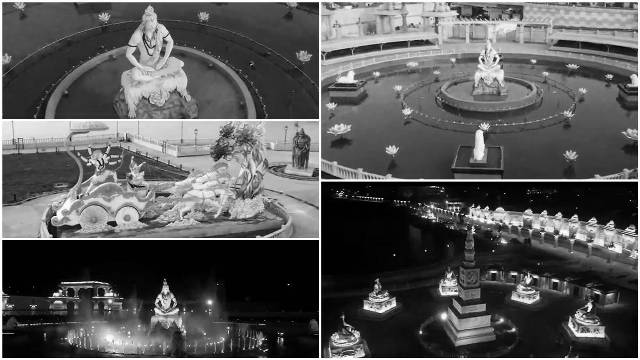 Ujjain : In the world-famous Jyotirlinga Lord Mahakaleshwar temple, the Mahakaleshwar courtyard built from 351 crores will be known as ‘Mahakal Lok’. This decision was taken in the meeting of the Council of Ministers held in the presence of Chief Minister Shivraj Singh Chouhan in Ujjain on Tuesday afternoon. Prime Minister Narendra Modi will inaugurate it on October 11.
Before the meeting, all the ministers including CM Shivraj bowed down to Mahakal. Chief Minister Chouhan said in the meeting that there is already Char Dham in the country, so Ujjain should be named Mahakal Lok in place of Ujjain Dham. After this, it was decided in the meeting that the newly constructed courtyard would be known as Mahakal Lok.
After the cabinet meeting, Home Minister Dr Narottam Mishra informed that the airstrip will be developed in Ujjain, for which Rs 41 crore has been approved. The police band in Ujjain will consist of 36 personnel, its size will be increased. If the Shipra river is flowing and flowing, the ghats will expand on the lines of the river lakefront.
The meeting of the Madhya Pradesh Council of Ministers was held for the first time in Ujjain. Earlier this meeting was scheduled to be held in Bhopal, but in view of the Chief Minister’s visit to Dewas on the same day, it was decided to hold the meeting in Ujjain. Before the meeting, the Chief Minister and ministers reviewed the construction works worth Rs 316 crore in the Mahakal courtyard.
A decision was made during the meeting. Mahakal Lok will be the name of the Mahakaleshwar courtyard that cost 351 crores to construct. On October 11, Prime Minister Narendra Modi will give it a formal opening. The second phase of work will then begin.
The Ujjain airstrip will be transformed into an airport by enlarging it. This work will be completed for the first time at an expense of 80 crores.
Since the extra positions have been granted, the police force will now have 37 positions instead of just 11.
approval in principle to allow Shipra’s project to proceed without interruption. Ghat will be expanded along riverfront lines.
In the league for cleanliness, Madhya Pradesh came in the first place. Ujjain ranked best in tourism service, whereas Indore was ranked first in urban management and cleanest city.
In Chief Minister Udyami Yojana, age has increased. The qualifying was moved up to the eighth place.
In 90197 villages across 22 districts in the state, a Rs. 17,000 crore surface tap water program has been approved as part of the Jal Jeevan Mission.

Oceansat-3 will be launched by ISRO