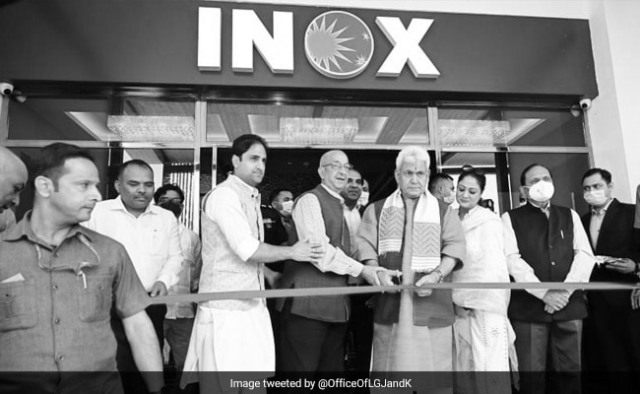 Srinagar: After more than three decades of waiting, Srinagar’s first multiplex opened its doors on Tuesday, putting an end to movie fans’ long waits to see their favorite actors on the big screen.

Manoj Sinha, the lieutenant governor of Jammu and Kashmir, announced that every region of the union territory would soon have 100-seat movie theaters when he opened Kashmir’s first multiplex in Srinagar.

After opening Shivpora’s first multiplex theater, speaking to the crowd. According to Sinha, there are moviegoers everywhere in Kashmir, and the Valley has a long tradition of movie theaters.

The Lt. Governor recalled a time when many people would gather to watch movies with their friends and families. In addition to entertaining them, he claimed that watching movies would allow them to dream large and think big.

He claimed that the 1965 Bollywood smash “Janavar,” starring renowned Bollywood actor Shammi Kapoor, was shown in a theater on Broadway. He claimed that Kapoor had such a deep passion for Kashmir that he had asked his family to conduct his funeral ceremonies near Dal Lake in Srinagar.

According to the Lt. Governor, Kashmiris have been clamoring for amusement for the past three decades, and today’s opening of the first multiplex will provide that opportunity.

According to the Lieutenant Governor, the districts of Pulwama and Shopian will soon be home to two multipurpose movie theaters. According to him, there are plans to build 100-seat movie theaters in each district of J&K.

The Indian Parliament made a significant decision on August 5, 2019, according to the Lieutenant Governor, making it a historic day. He claimed that the Delhi government is working to permanently establish peace rather than trying to buy it in Jammu and Kashmir.

In response to the new film policy, the LG of Jammu and Kashmir stated that many movies had lately been shot in Kashmir and that many more are in the works. He stated: “A movie city will likewise be built as soon as we enter it. We will give a lot of incentives to budding filmmakers under the new film strategy so that local employment can be developed”.

The Lieutenant Governor claimed that the long-time rulers of Jammu and Kashmir used to travel beyond the region and even abroad for their leisure while every form of amusement was unavailable here.

Because majority of the movie’s sequences were filmed in Kashmir, Dhar stated that we would be presenting “Lal Singh Chaddha” on the first day. He said that many of the artists in this are Kashmiris and that the multiplex will be open to the public starting on October 1.