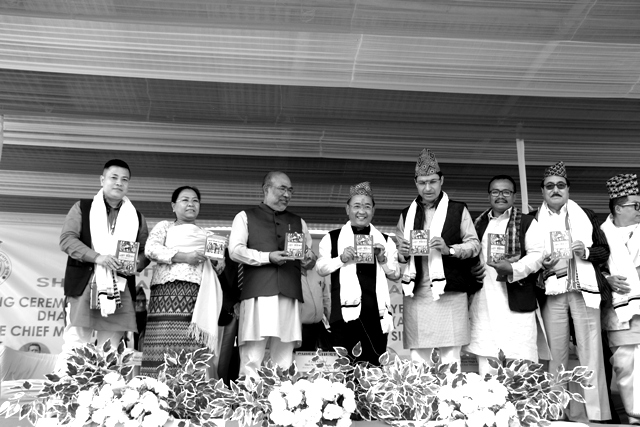 The Manipuri edition of “Great Minds on India” by Salil Gewali of Shillong was released yesterday at the special event of ‘World Peace Maha Yagya’ in Kangpokpi District, Manipur, by the Chief Minister of Manipur, N. Biren Singh. Mr. Raju Bista, Member of Parliament, and Shri Prem Singh Golay, Chief Minister of Sikkim, attended the program, as did other scholars from Manipur, Assam, and Sikkim.

The Manipuri edition of “Great Minds on India” was translated by Shri Sadashiva Singh of Manipur who was introduced to Mr. Gewali by the former Additional Chief Secretary of the Government of Maharashtra, Smt. Leena Mehendale. Smt. Mehendale, a prolific writer, has also edited and penned down the foreword to the Marathi edition of “Great Minds on India” which was formally released by the Governor and Education Minister of Maharashtra in 2015. A very renowned scholar from Manipur and former Secretary of Manipuri Sahitya Parishad – Shri Lamabam Tomcha Singh had edited the Manipuri edition of Gewali’s book.

A research-based book of quotations assiduously pieced together by Mr. Gewali since 1988 is highly commendable that aims at showcasing how the celebrated scientists, thinkers, writers, poets, statesmen such as – William Wordsworth, Friedrich Hegel, Voltaire, Johann Goethe, Ralph Emerson, Henry David Thoreau, Werner Heisenberg — a co-founder of Quantum Physics, T. S. Eliot, HG Wells, Mark Twain, Bernard Shaw, Erwin Schrodinger Carl Jung, William Butler Yeats, got inspiration from the ancient literature of INDIA. The title has long been drawing the attention of many eminent writers and scholars from across the world. A noted NASA scientist, Dr. AV Murali is the Chief Editor of the Book.

A US scholar Robert Brenton of New York, claims, “This book is fantastic and further testimony to the immense wisdom that comes from the great masters in ancient India, who saw the truth in ancient times and left it for us to ponder. I am fully convinced great jewels of profound wisdom are firmly rooted in ancient literature.” Robert Brenton is an ardent follower of Yoga literature.

A tribute to the Missile Man of India– Dr. APJ Abdul Kalam

Order to remove objectionable video of a judge from media platform