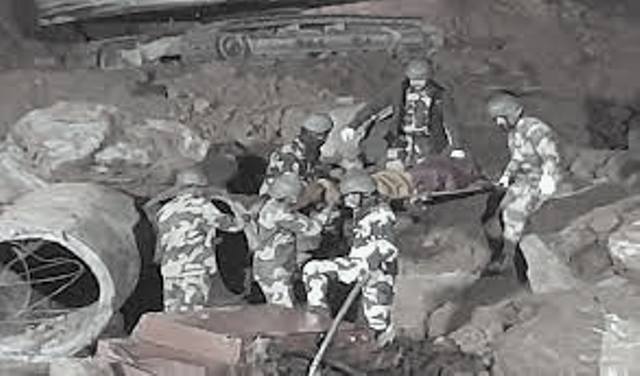 Aizawl : Bodies of two more laborers buried under the debris of a stone quarry were recovered on Monday afternoon in Maudar village of Mizoram’s Hanthiyal district. The two bodies have been identified as Shafiqul Islam (26) of Jaleshwar Bill in Goalpara district of Assam and Kahamrai (49) of Jaulpui in Lunglei district of Mizoram.

Significantly, after the accident, Surjit Roy (26) of Cachar district of Assam, four Madan Das (25), Rakesh Biswas (21), Mintu Mandal (22) of Nadia in West Bengal and Buddhadev Mandal (25) of Jharkhand were arrested on Tuesday morning. The bodies of Khemlal Kumar (22) and Omprakash Kumar (18) from Chatra area of ​​the state and Subrata Raptan (24) from North 24 Parganas in West Bengal were retrieved from the debris. The bodies of Shafikul Islam and Kahamrai were recovered late Tuesday evening.

A source in the 1st Battalion NDRF said that two more workers were being searched in the debris. They have been identified as Ajay Chakma (25) of Lunglei district of Mizoram and Zahidur Islam (27) of Barpeta district of Assam.
Sources said that both the bodies recovered on Tuesday evening have been sent to the district hospital for postmortem. After completing necessary protocols, the bodies will be handed over to the officials of the construction company ABCI Infrastructure Pvt.

A total of 10 bodies have been recovered out of 12 workers buried under the debris. NDRF sources said that the search is on for the remaining two workers.

A senior official of the district administration said that eight bodies were brought to Aizawl at around 12.30 am after post-mortem. The bodies were taken to the Lengpui airport at 8:00 am on Wednesday from where they were sent to their native places.

8,441 unrecognized madrassas comes to light in the survey

Kamal Nath Cabinet: Splitting of departments in the Government of Madhya Pradesh, know who got what?