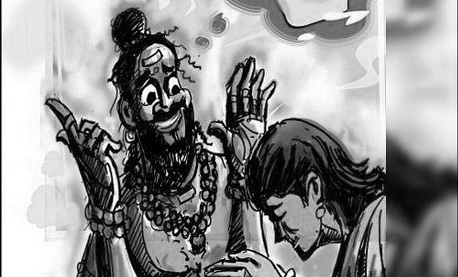 Vidisha: A Tantrik living in Vapcha village of Anandpur police station committed rape on a woman and kept threatening her. This tantrik assured to end the ongoing dispute between husband and wife through tantric powers. The accused committed the rape incident when on the pretext of worshipping the victim’s wife was called inside the room and the husband made her sit outside the room. This was revealed when a month later when there was a dispute between the husband and wife about something, the wife told her husband about the rape that happened on that day. After this, a complaint was lodged against the Tantrik at the Lettieri police station. The police registered a case and arrested the accused.

It was told that the incident is about a month old. Tantric was being resorted to due to the ongoing rift between husband and wife. Meanwhile, by taking the help of Tantric Kriya, the accused committed the incident of rape. Intimidated by the accused for a month, the woman reached the Later police station on the 13th and told the station in-charge Kashiram Kushwaha about the developments with her. After registering a case in other cases, started the search for the accused. After hard work, the accused was arrested and produced in court, from where he was sent to jail. Been doing it for 15 to 20 years.

According to the information received from the police, Shaitan Malviya Multa is a resident of Vapcha village of Anandpur police station. Which has been claiming to solve the problems of the people by doing tantric rituals for more than 15 years. The day he raped the woman. At the same time, it was also said that these secret things happen in the tantric process, it is not mentioned to anyone and at the same time it was comforted that now there will be no dispute between husband and wife, but after a month there was a dispute about something and so on. This entire matter has come to the fore during the controversy.

Sources reveal that the accused Shaitan carried out similar incidents with some women as well, but till now no one had complained. The police are extracting the complete details of the devil. Later TI Kashiram Kushwaha told that the accused is married, and there is a wife and children in the family. Complete information about the accused is being collected.

Snake in the plane, stirred up the passengers