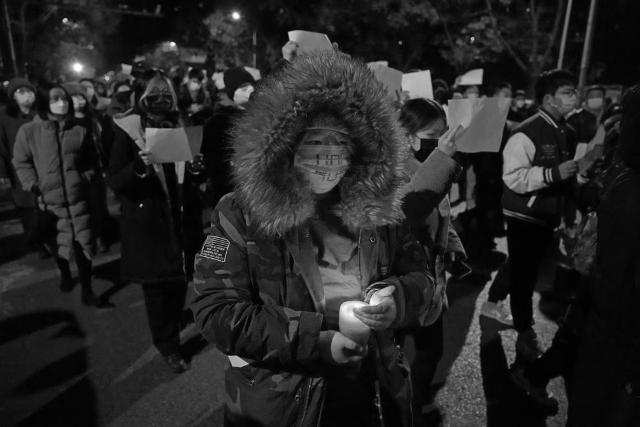 New Delhi: Hundreds of people took to the streets in China to protest the country’s zero-Covid policy. The demonstrators demand that the lockdown be lifted and that those who have been arrested be released. Demonstrations in major cities have become President Xi Jinping’s most difficult test since securing a historic third term in office.

A deadly fire in Urumqi last week sparked new public outrage, with many blaming Covid lockdowns for impeding rescue efforts. Hundreds of protesters, mostly young people, gathered near the Liangma canal to mourn for the victims of the Urumqi fire, light candles, play music, and hold up blank sheets of paper.

On Sunday night, at least 400 people gathered for several hours on the banks of a river in Beijing’s capital, shouting: “We are all Xinjiangians! Chinese people, rejoice! “, according to the news agency AFP.

According to the journalist, some protesters were chanting, “We want the vote,” “no to nucleic acid tests, yes to freedom, freedom of speech, freedom of the press, freedom of cinema, rule of law,” “we want the truth,” and “we don’t want fake news.”

In Shanghai, police clashed with protesters as officers attempted to move people away from the site of an earlier demonstration on Wulumuqi street, named after the Mandarin for Urumqi.

Lawrence, an accredited journalist in the country, was detained for several hours and beaten and kicked by police, according to the BBC. The journalist, however, was later released.

“It is extremely concerning that one of our journalists were attacked in this manner while performing his duties,” the statement said.

“Remember the Guizhou bus crash, the Xi’an pregnant woman who died, those who could not access medical treatment in Shanghai, those who died in the Urumqi tragedy,” “we will not forget,” “we are all Xinjiang people!” “The people must live!”

The public has been frustrated by the zero covid policy, which has resulted in sudden lockdowns, lengthy quarantines, and mass testing campaigns.
The crowd sang the national anthem and listened to speeches during the protest, while a line of police cars waited on the other side of the canal bank.

Authorities blocked the road to prevent cars from passing, and approximately 100 plainclothes and police officers responded to the scene. They were joined by paramilitary police coaches around 2:00 a.m. (1800 GMT). Protesters eventually agreed to leave after officers promised that their demands had been heard.

Flight from Amritsar to Singapore departs without 35 passengers